The Williamstown Braves defeated the Cherokee Chiefs 4-1 to win the South Jersey Group IV Championship on Friday.  This was their first sectional title in school history.

Tyler Apt pitched a complete game, finishing with 4 strikeouts and giving up 7 hits. Apt showed the heart of a champion, persevering through this one to bring the Braves to the Group 4 semifinal. The Braves left five runners on in the early part of the game, failing to give him run support early in the game.

Tons of fans packed the Williamstown campus in the afternoon to wait for this one.  Fans were in the parking lot serving hot dogs and hamburgers by lunchtime.  Crowds of people were tailgating and full of excitement.  The scene reminded me of the  school’s only football championship which was won at Rowan two years ago.  One thing you can always count on, when the Braves are playing for a title, the entire community will show up. Monroe Twp has some of the most passionate fans in the state.

Those fans will have to travel to Rowan University for the Group IV semifinal on Tuesday against Old Bridge. First pitch will be at 4 PM.

The first four innings would be the story of missed opportunities for both teams.  Apt got the action started off  for Williamstown with a 1-2-3 1st inning. He immediately looked calm and collected, picking up back to back strikeouts, and getting through the first after an Evan Powell groundout. This was a defensive game early on as both teams struggled to score. Cherokee pitcher Quinn Taylor would walk two in the second and the Braves would be in scoring position early. Taylor would counter with a quick strikeout and a forced flyout to keep the Braves scoreless.

Cherokee would threaten in the fourth as the Chiefs got singles from Evan Powell, Brett Bowles, and Hunter Mason. The Chiefs fans were on their feet as the Braves appeared to be in trouble, but Tyler Apt is the type of leader who knows how to work through adversity. He worked out of the bases loaded jam, forcing a groundout from Michael Faunt to end the inning and stranding three for Cherokee.

Sooner or later, someone was going to have to break the ice, and get their offense going. Williamstown would do just that in the bottom of the inning, as Quinn Taylor would walk two batters. Nick D’Alessandro would step to the plate with 2 outs and a chance to drive in a run. D’Alessandro would win the battle with an RBI single into center field to break the scoreless tie. Tommy Gibson scored the run, and the Braves took a 1-0 lead.

Cherokee would answer back immediately in the fifth with a sacrifice bunt from Anthony Martinelli, that moved Mike Borucki to third. This would set up Shane Albertson, who would rip an RBI single into center field, which would drive in the run. Cherokee had the game tied at 1 through five, and this looked like a war that would go down to wire.

Williamstown would once again answer with the knock out blow in the bottom of the inning. They came back firing after getting a leadoff double from Ross MIcka. Ross has been dependable all year in clutch situations. The senior catcher has been the heart and soul of the Braves. Cherokee would replace Quinn Taylor with Jarrad Delarso after hitting a batter. This would set the stage for Steven Hawk. Hawk would drive another run in with a sacrifice bunt. The Braves were doing a great job using the bunts when needed to drive in runs.

The Braves continued their fifth inning surge, as Denny Bentley got on base after a fielder’s choice groundball, but it was a throwing error by Jarrad Delarso that would give Williamstown its biggest lead of the game. Delarso would overthrow the first baseman, causing two more Braves runs to come in. All of a sudden, the Braves were smelling blood with a 4-1 lead.

Cherokee would fight back in the sixth as Tyler Apt walked Hunter Mason, and Michael Faunt hit a double. Mike Borucki would have a great opportunity with two runners on, but he would fall just short. Borucki blasted a long shot that flirted with being a game tying home run, but it fell just short and was put away by Williamstown to end the inning.

Cherokee would have Anthony Martinelli on deck, than the top of their order in the seventh. The Chiefs would struggle to start the inning. Taylor Apt forced Anthony Martinelli and that Shane Albertson into hitting pop ups. The Braves were one out away from being the champions, but Cherokee was not going away just yet. Duncan Balara drilled a single deep into center field to extend the game. Evan Powell would come up with a chance to keep the Chiefs alive.

Powell, who is known for his power, would give one a ride to center field but it was not far enough. When it came down, the last out was made and the WIlliamstown Braves were the champions! The student section stormed the dugout as the campus was filled with excitement! This was clearly a community on fire, after winning the section for the first time.

It was perseverance and mental toughness that carried the Braves to victory. No matter how many times Cherokee had runners in scoring position, Tyler Apt stepped up his game in a big way. Coach Joe Smith would not give up on him, and Apt delivered in a huge way. Nick D’Alessandro and Ross Micka both had big hits to lead the Braves offense. It was D’Alessandro that got the Braves on the board with his fourth inning RBI single. 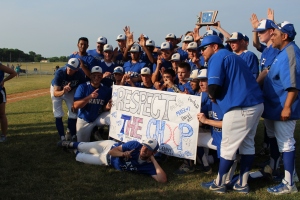 After the game, NJSR writer Jim Rosa caught up with Micka. Hear what he had to say here-

Williamstown advances to the Group IV Semifinals, where they will host Central Jersey Group IV Champion Old Bridge on Tuesday at Rowan University. Old Bridge knocked off Jackson Memorial to get to this point.

Cherokee finished there season at 17-9, while Williamstown improved to 20-5 and 1.

That previously mentioned trip to Rowan for Braves fan will not be a long one, and expect the New Jersey Athletic Conference school to have the atmosphere of a Williamstown home game! Braves Ace Denny Bentley should be ready to go with plenty of rest for this one. NJSR will have all the action on Tuesday.

Click this picture to see the full Group 4 bracket- 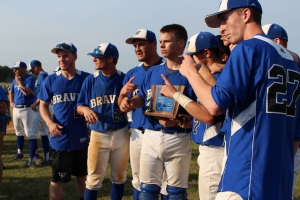