The Wide Receiver position is one of the most exciting in the game of football Today’s best teams always have a strong passing game. Every year different leagues around the country are featuring more and more passing teams. It is necessary for an offense to have a quarterback and receivers that have developed a strong chemistry. These are the teams that can put points on the board down the field. This really opens up an offense and makes it difficult to defend. Today we will look at five of the top Wide Receivers in the State of New Jersey.  Look for these five players to make a huge impact in 2015! 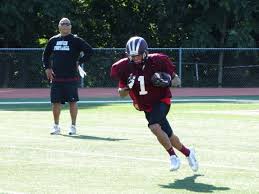 One of the biggest stories of the Summer was the transfer of Wide Receiver DeJohn Rogers. Rogers will join a Paramus Catholic team that is one of the most talented in the state. Paramus Catholic will look to make another run at a State Championship after losing to St. Joseph’s Montvale in the playoffs last year. Rogers is coming off a spectacular Junior season for Matawan, catching 36 passes for 616 yards and 5 touchdowns. Matawan went on to win the Central Jersey Group III Championship. Rogers has separated himself as one of the best in the State at his position. Rogers is as fast as they come, running a 4.5 40 yard dash. He can use his speed and athleticism to beat anyone down the field. It will be interesting to see how Rogers will fit into the Paramus Catholic offense. Look for Rogers to be a big part of their success in 2015. 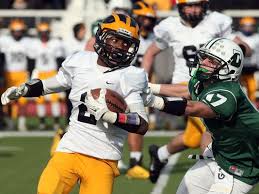 Khalil Haskins returns for his Senior year at St John Vianney. The Lancers had their best season in school history with a 10-1 mark in 2014. The team also made an appearence in the Non Public Group III Semifinals. Haskins was a big part of the offense as a consistent target for Quarterback Anthony Brown. Haskins caught 25 passes for 398 yards and 2 touchdowns. Khalil was also a threat on the ground, rushing for 566 yards and six touchdowns. There are a lot of different ways that St John Vianney can use him in the offense. Haskins will be tough for anyone to cover. The Lancers will face some tough defenses in Class A Central. Look for Haskins to bring his A game each and every week. He will continue to make spectacular catches and help this offense become one of the best in the State!

Jasir’ Taylor made a tremendous impact for Brick Twp this past season. The Sophomore Wide Receiver caught 41 passes for 569 yards and 5 Touchdowns. Brick went on to win the Class A South Championship and make the Central Jersey Group IV Semifinals. Taylor is a speedy receiver who can get down the line in a flash. He’s also not afraid to make the tough catches over the middle to make things happen. Taylor will once again be a huge part of the Dragons offense. He has already been working well with new Quarterback Tom Zbranak in training camp.  Jasir’ Taylor will team up with Javion Harris to form one of the best combinations in the league.  The Dragons will have one of the best passing offenses at the Shore in 2015.

Darion Carrington is ready to break out and have a huge season.  Carrington has a lot of experience, playing varsity since his freshman year in 2013. Carrington has been working with Quarterback Mike Husni for the past two years. Carrington finished 2014 with 16 catches for 284 yards and 2 touchdowns. Toms River North runs an offense that likes to spread the ball around a lot. Carrington at 6’2″ is a Wide Receiver that can simply go and get it. He can out jump most cornerbacks in this league. The Mariners will rely on him to be a big target in the red zone. Look for Darion to build on his numbers this season. Carrington along with Bryce Watts have the opportunity to be one of the best duos in the league. This will help Toms River North compete for the Class A South Title. 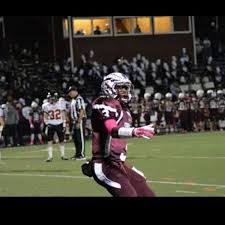 Isaiah Parker will be a big part of the Indians offense.  With the transfer of Javion Harris to Brick, the Indians will count on Parker to make a lot of plays down the field. Parker is a great athlete that brings a lot of speed to the game. He can use his 6’0″ frame to battle for a lot of tough catches. The receiver is also very agile and can make people miss. Defenses will have a hard time keeping up with him. Look for Parker’s numbers to increase from the previous season. The Senior will also be one of the leaders on the team and will help motivate the other players around him. Parker has spent a lot of time working in the offseason. He is ready to take his game to the next level!

Stay tuned to NJSR as we continue to look at the best players in the State! Follow @schoops1, @shoresportsnj, and @jimrosa519 for all the latest updates.