The Rumson Fair Haven Bulldogs are ready to once again make some noise in 2015.  The Bulldogs have been waiting to hit the field all year. RFH has been working out in their State of the Art Fitness Center that was built in 2013. The Bulldogs are coming off a 9-3 campaign in 2014 that ended with a second consecutive Central Jersey Group II Championship. For the Seniors, the last two years have been a sweet ride,  but the players are certainly not satisfied. This group will have the opportunity to make it three state championships in a row. However, it all starts in training camp. The season will kick off against a very strong and fast Matawan Huskies team that also won their section last year. The Bulldogs will look to get off to a great start and set a positive tone. Rumson is in a great position with several starters returning on both sides of the ball. Head Coach Bryan Batchler will have a lot of depth to work with this season.

Junior Michael O’Connor comes back for his second year as the starting quarterback for the Bulldogs. Rumson Fair Haven is moving from the I-Formation to the Shotgun to take advantage of O’Connor’s strengths. O’Connor is a great athlete at 6’1″ and 185lbs. The young signal caller can hurt you with his arm and his legs. He can really do a lot of damage to a defense with his mobility. Last year he burst on to the scene, rushing for 965 yards and 13 touchdowns. O’Connor also showed promise as a passer, finishing with 530 yards and 6 touchdowns. Mike had one of his best games of the season on the big stage against St John Vianney. In a 35-28 loss, O’Connor led the offense with 260 yards rushing, carrying the ball 26 times. The new Shotgun offense will allow O’Connor to make quick decisions with the football. This Bulldogs will be able to utilize his athletic ability to the fullest potential. Mike has been working hard in the offseason, putting on 15 pounds of muscle, and working on his accuracy throwing the ball. The Rumson Fair Haven offense will clearly go as far as O’Connor can take them in 2015!

NJSR had a chance to catch up with Michael O’Connor to talk about the upcoming season. 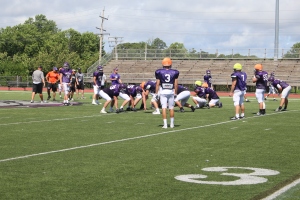 Rumson Fair Haven will face a challenge after graduating the best running back the school has ever had. Charlie Volker was one of the best players in the history of the Shore Conference. It was Volker’s running ability that helped lead the Bulldogs offense to two consecutive state championships. Volker finished his high school career with 45 touchdowns. While you cannot replace a player like Charlie Volker, the Bulldogs will have plenty of talent in the backfield for the current season. Rumson Fair Haven will use multiple running backs out of the shotgun formation. Junior Matt Vecchiarelli is a running back with a wide skill set. Vecchiarelli is quick to get through the hole and can use his agility make defenders miss. Matt filled in for Charlie Volker in the game against St John Vianney last year. The young running back had a great performance, rushing for 130 yards on 18 carries. Senior Lachlan Hull will move from Wide Receiver to Running Back. He will share some of the carries. Bryan Hess will also contribute out of the backfield. Rumson will be able to use all three running backs to really boost their ground and pound attack. 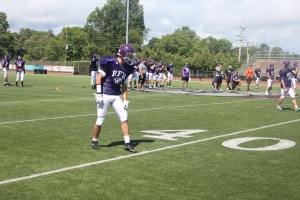 The team also returns a lot of reliable targets at the Wide Receiver position. There will be plenty of weapons for Michael O’Connor to work with. Senior John Kingdom brings a lot of experience to the group. Kingdom is 6’0″ with some good speed on the outside. He has already developed great chemistry on the field with O’Connor. They will be able to make a lot of things happen.

Sophomore Elijah McCallister adds a unique element to the offense at 6’6″ McCallister who already has a Division 1 offer from Temple University, towers over just about every defensive back in the league. He will be a matchup nightmare for any defensive coordinator to scheme against. Look for McCallister to be an automatic red zone threat.  Tyler Pierson will be another target that will be a big part of the offense. Pierson is 6’4″ and has the ability to go up and get the ball at any time. Pierson can use his strength to make the tough catches over the middle. Seniors Noah Stoudemire and AJ Bruno will also look to contribute. This is a group of receivers with a lot of size that will provide some difficult matchups for opponents each and every week.

The Bulldogs return an offensive line with a lot of size and strength. This is a line that is very strong, but athletic at the same time. They can blow open holes for the running backs, and pass block for O’Connor.  Senior Center AJ Kelly will make the calls. Kelly brings a lot of experience and leadership to the table He can rally his teammates in any situation. Left Tackle James Oceuna and Guard Brian Lawless are also Seniors. The team will rely on their ability to anchor that side of the line. All three Senior offensive linemen know what it’s like to play in two state championship games. It means a lot when you have players with big game experience. They have a lot of knowledge to share with their younger teammates. Right Guard Tim Lenonard is nearly immovable at 6’3″  and 280lbs. Defensive tackles will not have an easy time getting through him. Sophomore Nate Raphan will step into the starting lineup at the Right Tackle position. Raphan will be thrown right into the fire, taking on some of the best defensive ends in the league. Raphan has the potential to be one of the best tackles in the Shore. Sophomore Justin Johnson will also be in the mix to contribute to this offensive line. This is a very strong group that will pave the way for O’Connor and the running backs to pick up some major yards this season. 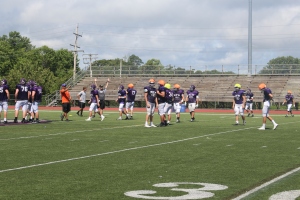 Defensively, fans have to be really excited about how good this unit can be. Rumson will once again run a 4-3 alignment with four down linemen. This setting has worked really well for the team throughout the years. This is one of the most aggressive defenses in the league that can also force a lot of turnovers. Senior Captain and LInebacker Max Pfrang will lead the way for the defense. Pfrang is coming off an outstanding season with over 70 tackles. Pfrang is a linebaacker who can use his instincts to read what the offense is doing. He is quick to the ball carrier and can blow up any play. Pfrang is also a strong leader and comes with a high energy level. That energy carries over to the entire group. Junior Linebacker Mike Ruane is another versatile linebacker who can do many things on the field. Mike had a phenomenal 2014 season, finishing with over 100 tackles. This was quite the debut for a sophomore season.  Ruane can shoot through the gap and find the ball carrier. He can also cover tight ends when needed. James Melia will start at the WILL Linebacker position for Rumson. Melia is a solid tackler and can also help in coverage. Melia is very tough and knows how to control his side of the field. Look for the combination of Pfrang, Ruane, and Melia to be among the best in the Shore.

Max Pfrang and Mike Ruane stopped by to discuss the expectations for the defense this season.

The Rumson Fair Haven defensive line is also ready to make a statement. This group will make life hard for a lot of quarterbacks around the league. Class A Central has been warned!  The defensive ends are led by Seniors Matt Waters and Ian Clarke. Waters has a lot of speed off the edge at 6’0″ and 190lbs. Clarke can also put a lot of pressure on opposing quarterbacks from the other side. Both these players make it very tough for offensive tackles in one on one matchups. Sophomore Jack Woods will also be a part of the rotation. Woods is a young player with tremendous upside. He will get his fair share of the snaps this season. The defensive tackles are Senior Butch Clark and Junior Liam Adams. Clark had a fantastic season in 2014. Adams knows how to be a disruptive force on the line. This is a unit with plenty of experience. They know how to get down the field and after the ball carrier.

The defensive backfield is another area of strength for the Bulldogs. Senior Captain Michael Caruso will be another leader on this defense. Caruso is a good all around cornerback who can play press or man coverage. You can put Caruso up against any of the best receivers in the league. He will always be a tough matchup for anyone. Caruso grabbed 4 interceptions in 2015. Jake Gianotto and Griffin Schultz will also look to get on the field and provide depth at the corner position.

Mike Murdock and Emmitt Jennings will occupy the safety positions. Both safeties have great field vision and awareness. They can provide help for the cornerbacks over the top, and can assist with the run defense in the box. The Rumson Fair Haven secondary is full of outstanding athletes. This is a group that will give 150% on every snap. They will not give up until the whistle is blown. 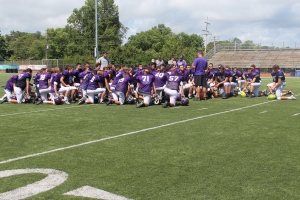 Fans have to be excited about the potential of this Rumson Fair Haven team. When you return so many quality starters on both sides of the ball, the possibilities are endless. Michael O’Connor is already becoming one of the best Quarterbacks in the Shore. This year he will become an even better passer. O’Connor has a great group of running backs and receivers to really make this offense shine. Expect the Bulldogs to rack up the points and yards this season.

Max Pfrang, Mike Ruane, and Michael Caruso are the heart and soul of this defense. The team will ride and die with their leaders. These players have been waiting all year for the opportunity to get back on the field. Rumson Fair Haven will have every opportunity to win Class A Central this year. The defense has all the talent that it needs to compete with defending division champion St John Vianney. If the Bulldogs come out and play an A game each and every week, they can compete with anyone in the Shore. Expect Rumson Fair Haven to make a serious run in Class A Central, and Central Jersey Group II. The potential three-peat is very possible.